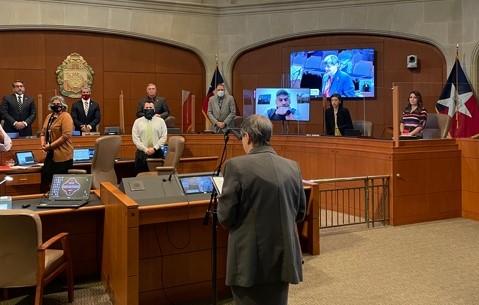 This article was written by Rick Casey and used with permission of the San Antonio Report.  It chronicles collaboration between Project Quest and the San Antonio Ready to Work program.  Though it is a rather lengthy article, it certainly shows the leadership of Sr. Pearl Ceasar, CDP and her influence in city politics!

“I figured San Antonio City Manager Erik Walsh is at least half Irish Catholic. His last name is as Irish as Paddy’s shamrock, even if “Erik” with a “k” is decidedly un-Gaelic. I was right. His father came from Ireland as a young man 60 years ago on a six-month tourist visa and never left. He planted himself in this country first with a stint in the Army, and then with one in the Air Force, which brought him to San Antonio and Walsh’s mother.

Erik Walsh attended Central Catholic High School but went to a public elementary school. This interested me because I had planned to offer the wisdom that comes from having experienced nuns early in one’s life.

Nuns are the human embodiment of the old saying that what doesn’t kill you makes you stronger. They have thrived in a global institution in which all formal power is wielded by men who don’t have wives to tame their testosterone. Within the church, nuns have been treated accordingly through history.

Yet anyone who was taught by nuns as a child knows how strong they are. So I was planning to suggest to Walsh that he needed to talk to a nun. I had a particular nun in mind – and a particular topic. Sister Pearl Ceasar is the Superior General of the Congregation of Divine Providence, the nuns who gave San Antonio Providence High School and Our Lady of the Lake University, among other things.

Back in 1992, she was an organizer for COPS/Metro Alliance when the powerful community organization designed and persuaded the City to financially back Project Quest, which early on and to this day has been recognized as one of the the most successful job training programs in the country. In 2011, when Project Quest was plagued with controversy from failings due not to corruption but to incompetence, Sister Pearl was brought in to turn it around. She did and ran the organization for six years.

Now the City of San Antonio is embarking on SA: Ready to Work, a program approved by the voters last November that will spend $154 million over five or six years in an effort to train the city’s working poor for good-paying jobs that the city is now generating.

It’s an exciting idea, but hardly one that is easily accomplished. The City and the nation have over the years poured big money into ineffectual job training programs. San Antonio has already had hiccups with a $75 million job training program funded by federal COVID-19 relief funds.

And in its new, more ambitious effort, City Hall has already had one public clash with COPS/Metro last December when documents indicated the City would be hiring a 63-member staff to run the program. COPS/Metro blasted it as “a bloated bureaucracy,” and the City backed off.

Last week another controversy was brewing when another document indicated that under its new program various agencies would receive funding, but the screening for their programs would be done either by the City or by an agency it delegated. That was a major problem for Project Quest. A strong majority of its clients get training for well-paid jobs, mainly in the medical field, through rigorous programs at the Alamo Colleges. Candidates for Project Quest must have at least a GED or high school diploma and must show a willingness to work hard in the full-time program. Candidates are carefully screened to maintain an 80 percent graduation rate.

COPS/Metro doesn’t run Project Quest. It created the program, then recruited an impressive nonprofit board to run it. But it is very protective of its baby. It told City staff that its screening proposal would be very bad for Project Quest and suggested that nobody wanted a public squabble 10 days before early voting in the mayor’s race. The universal screening notion was dropped in a presentation to City Council Thursday.

Still, I thought Walsh should talk to the nun. I told him during an interview Monday that’s why I had asked about his Catholic school background.

“Funny thing you should mention Sister Pearl,” Walsh responded. She had been one of many people he and City staff had met with last fall, but on Friday he had received a text from COPS/Metro urging him to meet with her.

“We ended up having a nice long conversation yesterday and talked about some of the history I was peripherally aware of,” he said. “ We talked about the importance of starting the trajectory in the right way.”

Sister Pearl was also pleased with the conversation, saying she believes Walsh wants to do the program right. She stressed that doing it right was much more important than doing it fast.

Before COPS/Metro took Project Quest to City Hall, she said, it held 500 house meetings with 5,000 people, including many who would be candidates for the training. In addition, then-Mayor Nelson Wolff set up meetings for them with 60 employers and attended many of the meetings himself. The process, Sister Pearl said, took two years but was crucial in designing a successful program.

In an earlier conversation, I asked what her advice would be for those shaping the city’s program. One was careful screening. Setting up candidates for failure helps nobody. Some applicants need remedial work. That’s not part of Project Quest’s program, but other agencies might take it on.

A second important component, she said, was weekly group counseling sessions in which participants report how things are going and seek help when they need it, help the program provides. She said counselors must be well-trained and must have a workable caseload.

I asked a national expert what advice he had for the program. Paul Osterman is a Massachusetts Institute of Technology professor of human resources and management. He has been following Project Quest since its early days and considers it one of the best programs of its kind in the country.

He was in one of the groups City staff talked to last fall, but as with Sister Pearl, a longer session with him would be good for Walsh or other City staff to have. The most striking idea Osterman put forward was that the City should not see itself as managing the program, but as a foundation awarding grants to agencies who would be screened either by City staffers with expertise or by outside panels organized for that purpose. Any grants awarded would come with performance standards so that agencies that weren’t succeeding could be replaced.

One advantage is that this approach would discourage politics from becoming part of the process. Another relates to the fact that voters approved a proposal that after the City raises $154 million through a one-eighth-cent sales tax, the ensuing revenue from that tax will be directed to VIA Metropolitan Transit. This is different from Pre-K 4 SA, the successful early childhood program whose sales tax revenue must be periodically renewed by voters.

Under the grant approach, successful agencies will be able to use their track record to seek grants from other sources, like a $1 million Rockefeller Foundation grant Project Quest won three years ago. Agencies could also seek funding from major corporations that have benefited from their work.

Walsh seemed open to the foundation model. And he has slowed the process down. The next round of requests from agencies, he said, will seek information on how best they would see the program working. Only then will his staff put out final requests for proposals. He doesn’t have two years to do the kind of research with potential participants and employers that COPS/Metro did, but the City could ask grant applicants what kind of research they had done.

As it seems, Sr. Pearl’s advice was taken, the process has slowed down, and the city will seek information on how best to see the program proceed.  We never know how our “voice” can affect change! 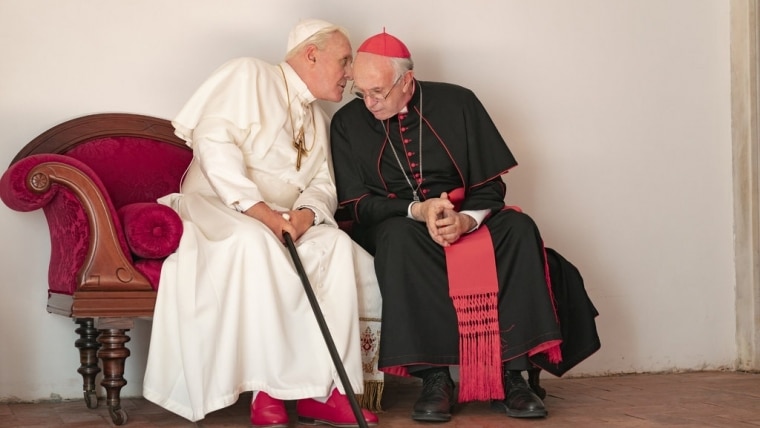 Truth and Love in “The Two Popes”