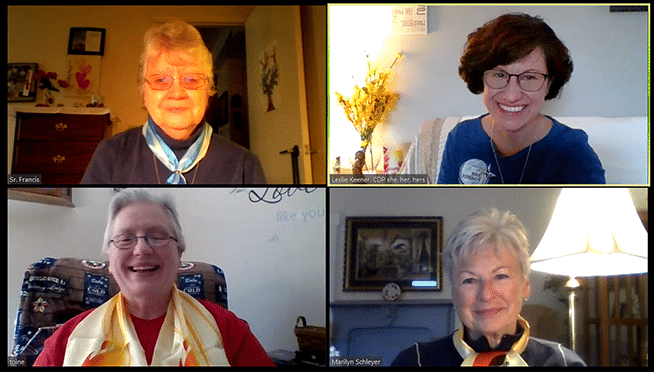 The Sisters of Divine Providence from Melbourne, Kentucky, through Sr. Lucy Zientek, shared this story of how they responded to the pandemic.

Sr. Francis Margaret Maag, CDP has served in various parish positions (teacher, principal, and director of religious education) during the course of her religious life. But in 2014, her discernment told her that it was time to try something different, so she took up residence at a 90-unit, privately-owned facility for the elderly and disabled poor in Dayton, Kentucky. Her hope? Simply that she could be a conduit of God’s providential care for the people who lived there.

One of the primary ways Sr. Francis went about this was by providing opportunities for people to gather with each other. She invited them to share a simple meal with her from time to time. She offered occasional opportunities to share faith and to study the Bible. She organized parties for an upcoming birthday of a resident, or to celebrate a big holiday. Over the years, community-building among the residents became a specialty of sorts for her, and so when the Province Chapter of 2019 recommended that Sisters investigate new ways of forming expanded community, Sister Francis already had a few ideas about this and was more than eager to get started.

Having recently discovered that a CDP Associate whom she knew through the Northern Kentucky Peace and Justice Committee lived just five minutes away, she decided it was time to ask the Associate to think and pray about joining with her in this adventure. And within a month, Divine Providence managed to arrange the perfect occasion for the invitation to be made.

At the Province celebration of Foundation Day on August 23rd, Associate Marilyn Schleyer took a seat next to Sister Francis Margaret. At the first opportunity, Sr. Francis shared the background of the Chapter’s recommendation with Marilyn and made the proposal. The words were hardly out of her mouth when Marilyn joyfully expressed her enthusiasm for the idea. Marilyn had desired to live the charism more intensely for some time. Sr. Francis’ invitation seemed to be God’s response to this longing!

Immediately, the two began making arrangements to share prayer, a few meals and mutual visits on a regular basis. But this “expanded community” project got a big boost when it was time for the Sisters to work on their annual goals for local community. That’s when CDP Provincial Barbara Rohe suggested to Sr. Francis that she develop those aims with Marilyn rather than with her local contact community of Sisters.

In line with the Chapter 2019 mandate and province-wide goal of becoming a Laudato Si’ community, Sr. Francis Margaret and CDP Associate Marilyn Schleyer (a private practice psychologist) decided they would also take on educating the residents at the Dayton facility about the environment. So far, they have offered two events that have drawn about ten residents each time. The gatherings featured a video (first, The Story of Stuff and next, Troubled Waters), after which there was some great group conversation and an activity that helped everyone get in touch with which commonly-used materials are most destructive of Earth.

These events are sure to get even more creative in the future, considering the two women who are planning them. With the advent of COVID, their venture into “expanded community” has expanded even more, and in a digital direction. Prayer and faith sharing is now happening over Zoom, and Sr. Francis and Marilyn are being joined on a regular basis by a second CDP Associate, Antoinette Hummeldorf, and Sr. Leslie Keener, director of the province’s Godspace ministry. Sr. Leslie often serves as Zoom host for the group now, spelled at times by Marilyn.

Where will all this go in the future? Things being what they are today, no one really knows. But what we can be sure of is that all we have to do to get to where we need to be in that future is to “follow the designs of providence”—one small step at a time!

Seems like they have taken some large steps to respond to the needs of the times! 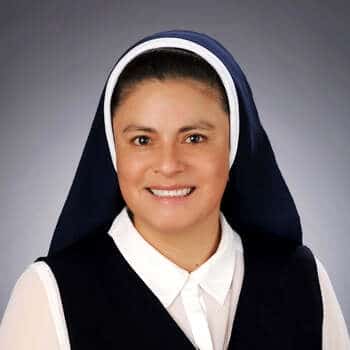