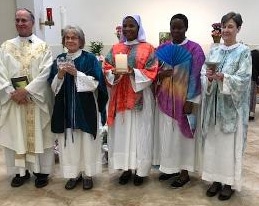 The Sisters of Divine Providence in San Antonio, Texas are committed as a congregation to the restoration, preservation, and survival of the Earth.  In this article see what they are doing to fulfill that sacred trust.

“On April 22, 2021, Earth Day was celebrated around the world, and the CDPs participated by spreading awareness throughout the community. CDP Sisters were invited to celebrate in Regan Community Room at Our Lady of the Lake Convent Center. The day began with an Earth Day prayer service and was followed by a special Mass, which was livestreamed to the Sisters’ Facebook page and made available to the public. Earth Day is celebrated to promote knowledge that Earth’s protection and restoration is human responsibility. And for the CDPs, it also provides an opportunity to honor the Sisters that began this impactful initiative.

The Congregation of Divine Providence (CDP) advocates for the protection, preservation and restoration of Earth through its Earth Care Committee. In 1993, the Sisters adopted the following mission statement which outlines their commitment to ensure all care for Earth.

Recognizing that the earth is a living organism and a sacred trust impels us to commit ourselves as stewards for the restoration, preservation, and survival of the Earth.

We will, as individuals, and as a community, join with others to save this planet for future generations by: educating ourselves; making appropriate changes in our lifestyle; addressing the public, systemic dimensions of this issue.

Established by the CDP Sisters in 2002, the CDP Earth Care group was initially made to be part of the CDP Social Justice committee until it was officially recognized as a committee by the Congregation in 2002. Sisters Frances Lorene Lange, Martha Rose Lange, Jane Marie Gleitz, Louise Miksch, Marlene Queensbury, Anna Marie Vrazel, Mary Opportuna Hoelscher (deceased), Janez Schonfeld (deceased), Lucille Ann Fritsch (deceased) and Benedict Zimmerer (deceased) pioneered what is known today as the Earth Care Committee. In its beginnings, the Earth Care Committee was formed for members to educate themselves on efforts to treasure and respect Earth as a revelation of God’s self. The committee serves as a resource to the community, both to educate about harm done to Earth and to advocate for healthy environmental practices for all. Some of these practices include recycling, limiting waste, simplifying lifestyle, planting and tending trees, urging conservation of resources, writing public officials to advocate for Earth and more. Today, the Earth Care Committee maintains activism in the community by releasing public statements addressing climate change, urging state and federal governments to acknowledge climate change and participating in global strikes.

In 2019, the City of San Antonio (COSA) launched the development of its first Climate Action and Adaption Plan (CAAP). The plan was designed to meet the challenges of climate change and encourage the city to contribute to a better-quality living environment. Water and energy conservation, transportation options and clean air prioritization are encouraged by the CAAP. According to the 2019 San Antonio Climate Ready Report, the goal of this initiative is to make San Antonio carbon neutral by 2050. Because this project aligns with the CDP’s commitment to sustainability, the Sisters decided to help fulfill the City of San Antonio’s goal of planting 20,000 trees in 2020. COSA awarded the Sisters of Divine Providence a grant for twelve trees to be planted on the Congregation’s grounds. The CDPs were permitted to make their own selection of trees such as Mountain Laurel, Lacey Oak, Bur Oak, Texas Red Oak, Monterrey Oak and Mexican White Oak. These large and long-lasting trees will absorb greenhouse emissions, limit soil erosion, promote sustainability, and further beautify our campus while providing much needed shade.

The Congregation of Divine Providence is supportive of the efforts of the Earth Care Committee as its service continues to touch many lives. The Sisters of Divine Providence believe that God created Earth and entrusted each of us who inhabit this land to treasure it as a gift, as well as enjoy and care for it.”

In celebration of Earth Day, the Sisters in the photo accompanying this article, represent the four elements of Earth.

How are you caring for Mother Earth individually and as a congregation? 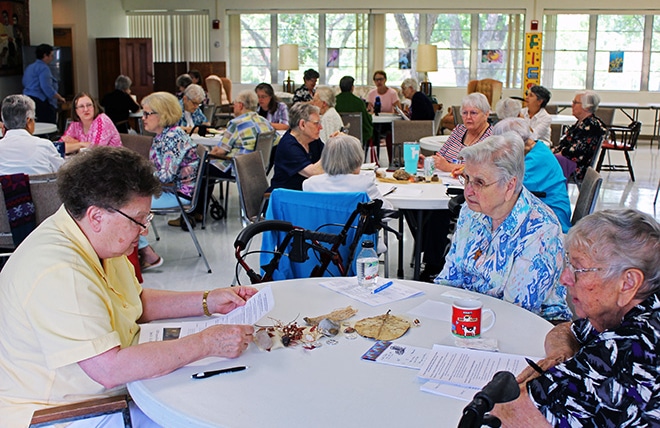 Living for the Future 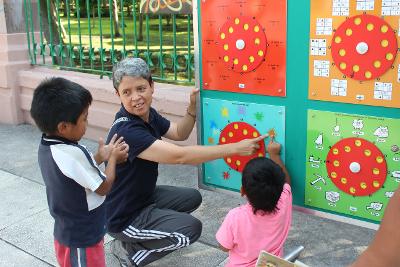